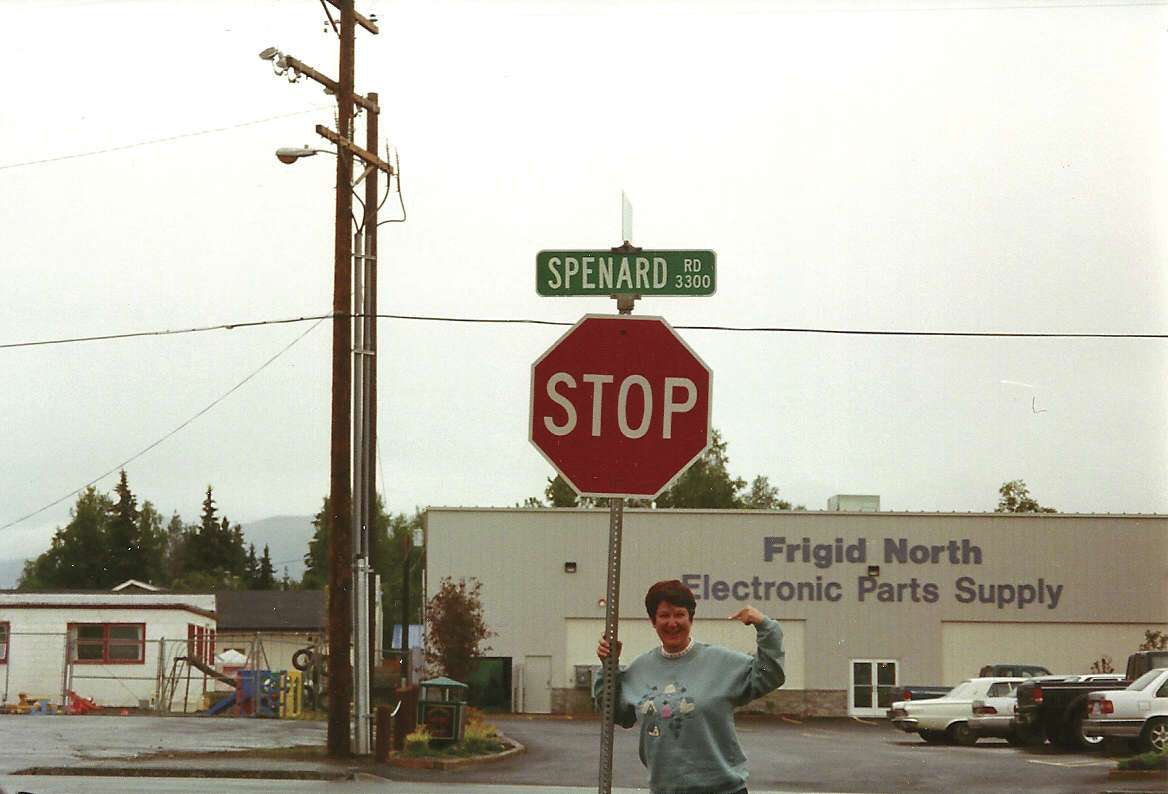 I recently came across The Spenardian while doing research about Joe Spenard for a cousin’s family tree. The name jumped off the page. I clicked on the link and saw a caricature of Joe in his famous yellow outfit, stub cigar and all. When I tried to order the magazine, the early website was not set up for international orders, which led me to contact the people at The Spenardian. They were very excited to hear from a relative of Joe Spenard. My grandfather, Adélard, was Joe’s brother.

I briefly told The Spenardian about my trip to Anchorage many years ago. That’s when they asked me if I would write an article about it for The Spenardian. I agreed.

PART I: My Extraordinary Trip to Spenard, Alaska

In the summer of 1998, I traveled the Yukon in Canada. I flew from Ottawa, Ontario to Calgary, Alberta, then I took a train through the Rockies to Vancouver, British Columbia, then a ferry from Vancouver to Vancouver Island, then a Canadian ferry north of the island from Port Hardy to Prince Rupert, where I took an American ferry through the inside passage to Skagway. I boarded a bus from Skagway to Whitehorse, Yukon. There I stayed with a couple I met in Ottawa who had invited me to visit the Yukon.

Once there, given that I was so close to Alaska, I felt that I could not go back home without visiting Anchorage and Spenard Lake. If I didn’t, I would regret it. I rented a car — my fifth mode of transportation — and off I went to Anchorage. My first stop was the Anchorage Museum because I knew they recently featured a Joe Spenard exhibit.

When I arrived, it was closed for lunch. I was so disappointed, but I took a chance and knocked on the door. Someone opened it. I introduced myself and as I was going to be in Anchorage for only a few hours, I asked if I could be let in. I had no idea that my name would provoke such a response.

The door was swung open and the museum worker was so happy to meet me. I was given access to all the material the museum had on Joe Spenard and was allowed to photocopy anything I wanted. She also telephoned the State Archivist in charge of the Joe Spenard file, Lawrence Hibpshman of the Alaska State Archives. He was on holiday, but someone got his files from his office and they were ready for me when I got there. I couldn’t believe how well I was received. Larry and I have since corresponded and we continue to do so. We have exchanged information about Joe over the years.

I told the museum worker that my Spenard family was thinking of traveling to Anchorage in 2000. She was so elated, she exclaimed, “We’ll have a parade!” The city probably would have done so because I had seen a newspaper article in Larry Hibpshman’s files about a visit of Joe’s wife’s niece from California to Spenard in 1960. The news and details of her visit were on the front page of the newspaper!

Unfortunately, our family didn’t go because it was going to be too expensive for many of us. 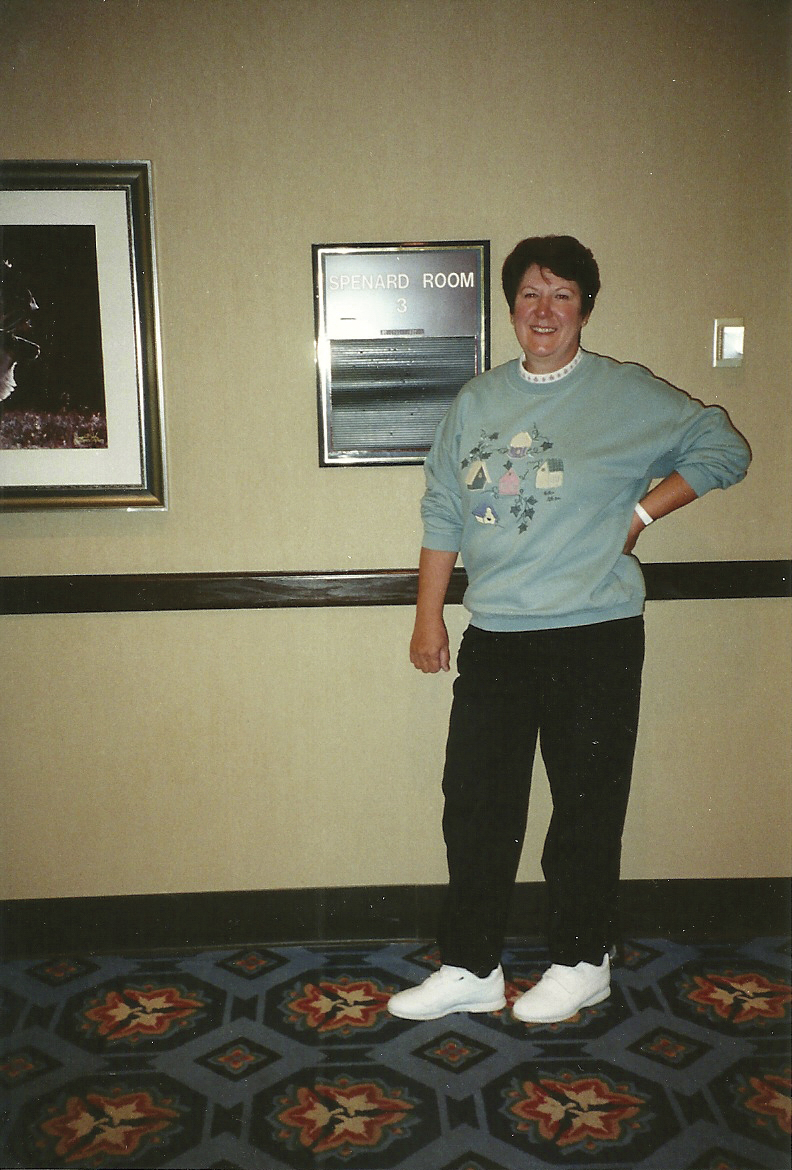 My next visit was Lake Spenard and the Regal Alaskan Hotel, which is now the Lakefront Hotel. On my way over, I stopped on Spenard Road and my friend who was traveling with me took a picture of me next to the street sign.

What a feeling I experienced when I arrived at the lake. I knew that the hotel was located where my great uncle Joe had his dance pavilion. I went in and had a meal at The Flying Machine Restaurant. On the last page of the menu, I read: “Joe Spenard found the future site of this hotel by a moose trail, now Spenard Road, in 1922.” However, the year is wrong; Joe was in Sacramento by then. According to the Alaskan historian Robert N. DeArmond, Joe and Edith arrived in Anchorage in early 1916 and left Alaska in late 1917. I have found Joe and Edith listed in the 1921 Sacramento City Directory.

I told the waitress that Joe Spenard was my grandfather’s brother. Once again with the special treatment, she brought me a box of old photographs to look through, but I realized that they were photos after Joe had left the area. Still, it was so nice of her to do this for me. I was also given a copy of the menu which I still have.

I decided to stay the night at the hotel because I very much wanted to tour the city before leaving. I telephoned a tour service that night and left a message with my name. I was picked up the next morning and the driver began the tour with the story of Spenard Road and Joe Spenard. He was making him out to be quite “colorful.” When my friend told him that I was a Spenard and Joe’s grand-niece, I remember him looking at me in his rear-view mirror in disbelief. I can still see the look in his eyes. He was so overjoyed and said that he thought he had misheard my name on his voicemail. At one point he said, “Wait ‘til I tell my wife I had a Spenard in my car!” (I believe his wife was involved with a genealogical society).

I left Anchorage with a sense that Joe Spenard was so beloved by the people. Yet, he and Edith had been there for such a short time. How could he have made such an impression on the people?

I was very grateful for the way I was received everywhere I went in Anchorage.

There is a lot of information in Alaska and on the Internet about Joe, but Spenardians do not have any information about his Canadian roots. You might know that he was born in 1879 in Ottawa, Canada and his parents were Alexandre Spenard and Emilie Martel, but that isn’t all.

Most of you do not know that Joe came from a family of 12 children; nine boys and three girls. However, two boys died of croup at a very young age. For most of his life, Joe was raised in a family of 10 children. He was the fourth child; my grandfather was the twelfth.

The family name “Spénard” was originally Spennert and of German origin. The first ancestor to arrive in Canada was Andre Spennert. However, the French-speaking people in Quebec City in Canada had trouble pronouncing the name so the spelling was changed to the people’s pronunciation. On his marriage certificate in 1690, the priest entered his name as André Spénard, but André signed his true name, Andre Spennert, including no accent on the “e” in his first name.

Joe was baptized Joseph Léon Spénard, yet he used the name Joseph Arthur Spenard. Why? No one really knows. This is only a speculation on my part, but his brother just before him who died at the age of two and a half was named Arthur. Did Joe take on Arthur’s name in memory of him? We will never know.