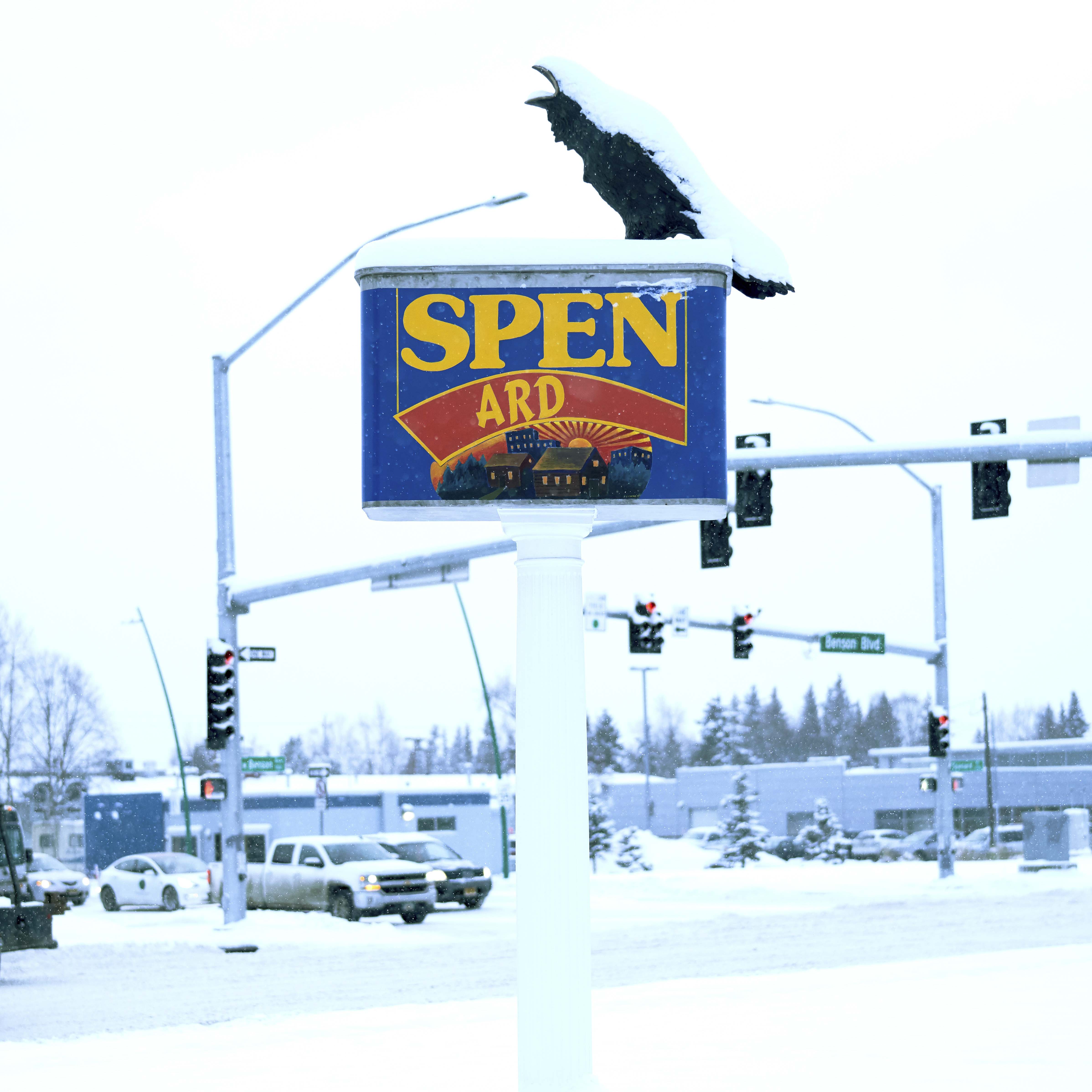 You may have noticed along Spenard Road near Benson Boulevard, a bronze raven perched atop a SPAM can or a pair of eyes’ piercing gaze.

Enter “SPEN,” and “The Eyes of Spenard,” two art pieces that sprung up in Spenard this fall.

SPEN is a giant, steel SPAM can whose logo is stylized to read “SPENard,” an homage to the classic can of spiced ham we all know and love. A raven sits atop the steel SPAM can which is nestled on a Greco-Roman column with a raven perched on top. The piece was created by local artist John Coyne.

Born in Fairbanks, Coyne returned to Alaska in 2011 after living all across the country. Since moving back home, he’s produced multiple large-scale sculptures in the state, like a 50-foot-long aluminum wall-sculpture in Nome and bronze orcas at Juneau’s Douglas Fish and Game building. The inspiration for SPEN emerged through his idea of creating a humorous piece while dabbling within the pop-art genre.

“I think pop-art, at it’s best, pokes fun at something and also celebrates it,” Coyne said.

SPEN was commissioned by the Municipality of Anchorage’s 1% for Art program, who also chose the location for the structure. The same program recently commissioned another piece on Spenard that was finished this February.

Coyne says “SPEN” took about a year to complete before officially finishing on Sept. 13. The SPAM can is made of stainless steel, which Coyne had to teach himself how to weld for the project. A welding shop in Palmer helped Coyne with the SPAM can’s signature, rounded edges. Coyne then welded the sculpture’s infrastructure, applied sign-painters paint and clear coat and mounted the can to the Greco-Roman column.

The idea to construct the project came about when deconstructing the word “Spenard,” Coyne said.

“I like the design of the SPAM can and I can take the word ‘SPAM’ from ‘Spenard,’” Coyne said. “It’s highly recognizable, so anyone looking at it will immediately think ‘SPAM.’ It’s a play on the word and it’s kind of poking a little fun at Spenard.”

Despite producing a piece that pokes fun at the neighborhood, the amount of time and work dedicated to the project is a testament to how he feels about Spenard, Coyne said.

“Everyone that I’ve met that I consider a friend, people that I work with, and my partner — hopefully she’ll marry me one day — I’ve met everyone in Spenard,” Coyne said.

Much like Coyne, James Temte and Michael Conti hold Spenard in high regard. Recently, the two completed “The Eyes of Spenard,” located where the Paradise Inn once stood.

Temte, a local artist and Alaska Pacific University’s program manager, has always been eager to jump on the chance to work with Conti, an Anchorage photographer. When Paradise Inn property owner Cindy Berger contacted Temte to work on the wall, he took the opportunity head-on.

The mural features a pair of eyes whose gaze is unmistakably recognizable thanks to its 50-foot-long stature. Finished on Sept. 22, the eyes depicted on the mural belong to Christina Adams, a student Conti photographed in 2012 when he taught photography at UAA.

Temte digitally scaled several of Conti’s photos to the size of the wall to test mock-ups, but kept coming back to the seven-year-old portrait of Adams which Conti never had a plan for — a portrait whose eyes, Temte said, “asks questions and has answers, all at once.”

The Paradise Inn has been known as a “seedy place” for “drugs, human trafficking and prostitution,” Conti said — with the Inn’s closure being caused by its former owner selling meth to an FBI informant in 2014.

Conti believes the mural’s eyes “keep an eye on the space” and shed light on both its dark past and those affected by it.

“[Adams] is a Tlingit woman, and a lot of the human trafficking tends to involve women of color, so we wanted to push back against that and shed light on that history,” Conti says. “There was some relationship there that kind of made sense to us.”

From the conception of the mural to completion, the entire process took roughly a month, but putting up the mural only took a weekend. Intending to highlight the texture of the wall behind the mural, Conti and Temte wheat-pasted just under 100 panels onto the wall with a waterproof polymer. On the left side of the mural, select panels were left off to create somewhat of a pixelated gradient.

“Partway through the process, James [Temte] was like, ‘Let’s see what happens if we leave some panels out and we can always put them back in later,’” Conti said. “So we just started to pixelate it in the way that you see now. Rather than paint over it, we decided to just let the wall tell the story in addition to the mural.”

Down the road, neighbors will spot “Sequel K’eldzeets,” which means “dance with me” in Athabascan, a piece by Alaska artist Tammy Holland that features three Alaska Native dancers made from recycled materials from all over Alaska — such as rocks from Fairbanks and metal from a building that was recently torn down at Elmendorf Air Force Base.

With the native dancers, the duo’s mural and Coyne’s “SPEN” popping up in the neighborhood this fall, Coyne believes Spenard’s art scene is on the come up.