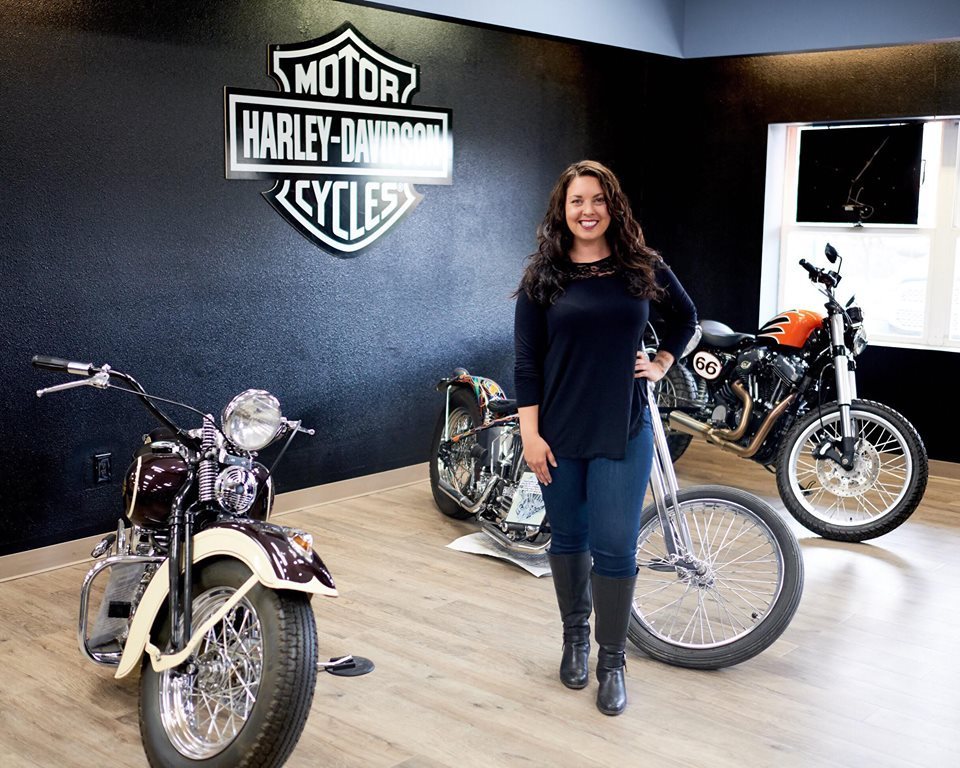 Dia Matteson was 14 years old when she started working at the Anchorage House of Harley-Davidson in Spenard. When her dad sold her the business in 2012, along with dealerships in Wasilla and Soldotna, Matteson was 25, making her the youngest Harley-Davidson franchise owner in the world.

While it might seem like the business was handed to her on a chrome platter, Matteson had been preparing for the job since she was a kid.

When she says she grew up in the shop, Matteson means it. They lived upstairs. An office replaced their living room and her old bedroom window looks out from where pre-owned bikes are displayed now.

Barry, Matteson’s dad, owned the business for almost 40 years. They’ve had locations on Spenard since the 70s including one in the Chilkoot Charlie’s building. He moved into the current location across from Gwennie’s in the 80s. When Barry bought the entire building, he turned the upstairs into a bed and breakfast called Hog Heaven. Matteson’s mom and older sister would help clean up the rooms.

“[W]e didn’t make breakfast for people, but we had a coupon that said, ‘Here’s your bed. Get your own damn breakfast,’ and they would go to Gwennie’s,” Matteson said.

She eventually started working in the clothing department and got her motorcycle license at 16. Matteson had already spent her childhood regularly riding with her dad on trips around the Lower 48. By her senior year of high school, she only had one class and spent the rest of her time working.

“I loved being around bikes and I liked the people,” she said. “I definitely just felt it was my spot.”

Matteson worked through different departments and learned the business from the ground up while going to the University of Alaska Anchorage. She eventually earned an M.B.A., but it wasn’t pressure from her dad that drove her.

“I’ve always been a pretty self-motivated, driven person, so it wasn’t like I had to have this carrot, but I would say, honestly, it’s the community and the people that I worked with,” Matteson said.

While taking over the shop might have raised eyebrows from some old-timers, Matteson said being a woman hasn’t factored into how she’s gotten to where she is today. There was no glass ceiling and her dad was supportive. She has the same challenges as anyone else running a business.

“People that are assholes will be assholes regardless of who they’re being an asshole to,” she said.

When an issue does come up, though, Matteson tries to face it head-on.

Since taking over, Matteson has launched a riding academy, which she sees as a major part of the future business. She’s not looking to reinvent the shop; she wants to keep the store’s unique Alaska vibe and community mindset.

Matteson and her dad still ride together whenever they can. They stay in town or do longer road trips like the upcoming Harley-Davidson “Ride Home” where they’ll head to the company’s headquarters in Milwaukee to celebrate its 115th anniversary this August.

With her drive and focus, it’s difficult to imagine Matteson doing anything else. She’s tailor-made for what she does and wouldn’t have it any other way.

“I have zero regrets. I love what I do,” Matteson  said.